So You Don't Get Lost in the Neighbourhood 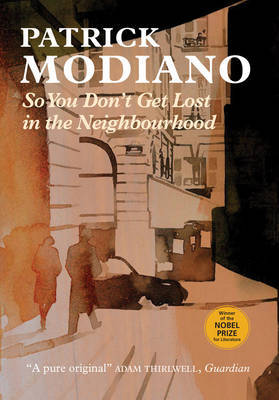 So You Don't Get Lost in the Neighbourhood

Jean Daragane is a writer and a recluse. As he enters his third month without contact with another living soul he receives a telephone call from a man who claims to have found his old address book. Though suspicious of his manner, Daragane agrees to meet his mystery caller, one Gilles Ottolini, who introduces his female confederate as Chantal Grippay. Together they interrogate Daragane about the names in his notebook, names he cannot always place, and, most disturbing of all, a name he only knows from his latest novel. Shepherded by Ottolini and Grippay - their motives as opaque as ever - Daragane begins to sift through a waste of lost years. Memories resurface of a house on the outskirts of Paris, a childhood where strangers came and went in the night while he was watched over by a woman whose past appears to be as obscured as his own.

Patrick Modiano was born in Paris, France in 1945. He was the recipient of the 2014 Nobel Prize in Literature. He previously won the 2012 Austrian State Prize for European Literature, the 2010 Prix mondial Cino Del Duca from the Institut de France for lifetime achievement, the 1978 Prix Goncourt for Rue des boutiques obscures, and the 1972 Grand Prix du roman de l'Academie francaise for Les boulevards de ceinture.