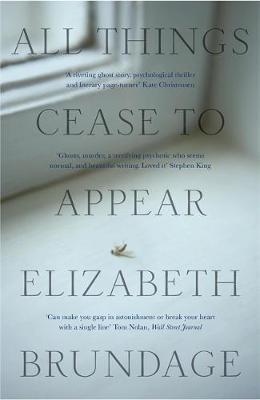 'Ghosts, murder, a terrifying psychotic who seems normal, and beautiful writing. Loved it' Stephen King 'Can make you gasp in astonishment or break your heart with a single line' Wall St Journal 'Superb. Think a more literary, and feminist, Gone Girl' Vogue This begins the morning Catherine Clare died. The day her daughter spent in the house with her. The evening her husband came home to find her. This becomes the tale of their marriage, and the ones around them. A tale of bonds between families, between lives living and lost and of the lonely ones that share no bonds at all. Who should be pitied. Who must be feared.

Brundage's brilliant new novel is as terrifyingly unsettling-and as beautiful-as cracking ice over a raging river. Part murder mystery, part ghost story, it's also a profound look at how past guilt informs the present, how what we yearn for is not always what we get, and how it's not only houses that can be haunted, but people as well. One of the most ambitious, original and gorgeously written novels that I've ever read-and been unable to forget. Caroline Leavitt All Things Cease to Appear is a riveting ghost story, psychological thriller, and literary page turner. It's also the story of four women: Ella, Catherine, Justine, and Willis. With masterful skill and brilliant empathy, Brundage brings each of them to vivid and remarkable life. At its heart, this is a story about women's grit and courage, will and intelligence. It's a powerful and beautiful novel Kate Christensen At once high art and a spellbinding thriller, this is a book of many wonders, including a character as creepily sinister as any created by Patricia Highsmith Beverly Lowry A dynamic portrait of a young woman coming into her own [and] of a marriage in free fall... It rises to [great] literary heights and promises a soaring mix of mysticism Booklist Brundage's searing, intricate novel epitomizes the best of the literary thriller, marrying gripping drama with impeccably crafted prose, characterizations, and imagery ... Succeeding as murder mystery, ghost tale, family drama, and love story, her novel is both tragic and transcendent Publisher's Weekly I bloody loved this. I could have taken weeks over it, lingering on the harmony and beauty of her language and the creeping delicacy of what was going on - but the plot and the people pull you in. It's an iceberg in disguise. Beneath the daisies and farmhouses, the drinks parties and local dramas something grand, tense and terrifying is shifting, between men and women, between townies and newcomers, between adults and children. And then a crack shoots through - unexpected light, the clarity of hatred, inevitability ... A lot of people will be getting this for their birthdays this year. Louisa Young Superb ... think a more literary, and feminist, Gone Girl. As the seemingly perfect marriage at its core reminds us, the most lethal deceptions are the stories we tell ourselves Vogue A book as lyrically written, frequently shocking and immensely moving as Elizabeth Brundage's All Things Cease to Appear transcends categorization ... Reading this book is at once wrenching and exhilarating thanks to Ms. Brundage's prose, which can make you gasp in astonishment or break your heart with a single line -- Tom Nolan Wall Street Journal Ghosts, murder, a terrifying psychotic who seems normal, and beautiful writing. Loved it Stephen King What, at first, seems to be a crime novel is much more, working on several levels. It's the painful story of a marriage that should never have happened ... Furthermore, it's a chilling portrait of a pyschopathic killer. Not so much a whodunnit as a whydunnit, this richly imagined, sprawling novel contains scalpel-sharp dissections of the characters and their increasingly complex relationships -- Fanny Blake Daily Mail Haunting ... Brundage exposes the mind of the killer in slow and forensic detail -- Joan Smith Sunday Times A portrait of a dysfunctional marriage with supernatural shadowing ... so beautifully written, so full of neat observations and telling details -- John O'Connell Guardian Mesmerising ... This isn't a whodunit - the mystery's easy enough to solve. Instead, it's a psychological portrait of a whole community ... [the] novel is compelling, as coldly beautiful as it is unsettling. It's haunting, in the best possibly way -- Sarah Dobbs Crime Scene If I could choose just one thriller from all that I have read this year to recommend as a Christmas present for a friend, it would be All Things Cease to Appear. This remarkable novel, an utterly compelling tale that is part supernatural ghost story, part acutely observed psychological thriller and part gripping family saga -- Myles McWeeney Irish Independent

Elizabeth Brundage graduated from Hampshire College, attended the NYU film school, was a screenwriting fellow at the American Film Institute in Los Angeles, and received an M.F.A. as well as a James Michener Award from the University of Iowa's Writers' Workshop. She has taught at a variety of colleges and universities, most recently at Skidmore College as a visiting writer in residence. She lives near Albany in upstate New York.