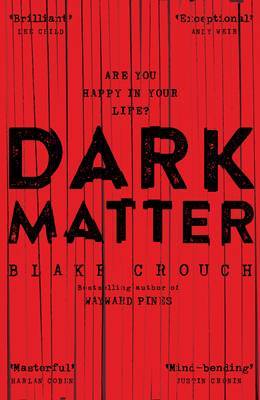 'Are you happy in your life?' Those are the last words Jason Dessen hears before the masked abductor knocks him unconscious. Before he wakes to find himself strapped to a gurney, surrounded by strangers in hazmat suits. Before the man he's never met smiles down at him and says, 'Welcome back, my friend.' In this world he's woken up to, Jason's life is not the one he knows. His wife is not his wife. His son was never born. And Jason is not an ordinary college physics professor, but a celebrated genius who has achieved something remarkable. Something impossible. Is it this world or the other that's the dream? And even if the home he remembers is real, how can Jason possibly make it back to the family he loves? The answers lie in a journey more wondrous and horrifying than anything he could've imagined - one that will force him to confront the darkest parts of himself even as he battles a terrifying, seemingly unbeatable foe. From the author of the bestselling Wayward Pines trilogy, Dark Matter is a brilliantly plotted tale that is at once sweeping and intimate, mind-bendingly strange and profoundly human - a relentlessly surprising thriller about choices, paths not taken, and how far we'll go to claim the lives we dream of.

The thriller of the year from Blake Crouch, author of the bestselling Wayward Pines trilogy.

Blake Crouch is best known for the Wayward Pines trilogy, which has sold more than a million copies, been translated into thirty languages, and adapted into a prime-time event series on FOX. He lives in Colorado.